You are here: Home » Blog » Learning About Livingston’s Namesake 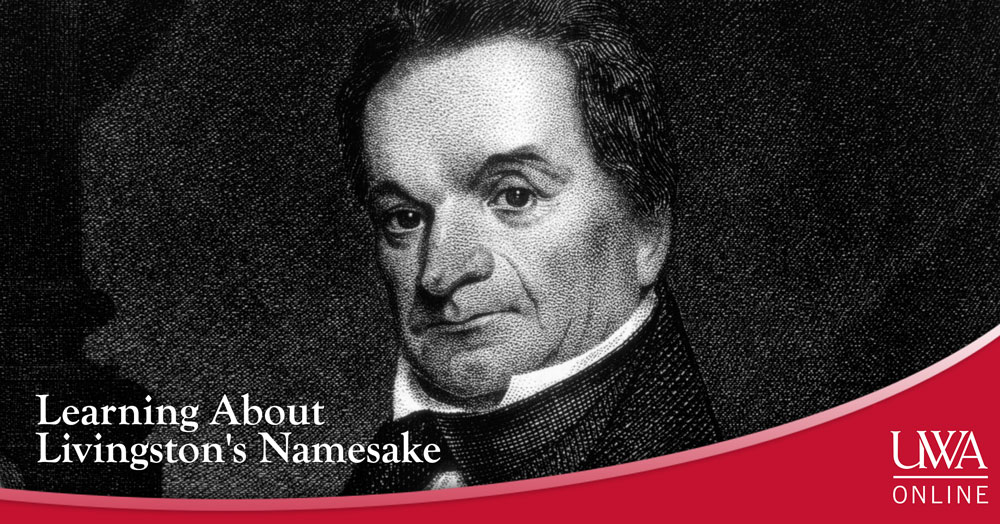 What’s in a name? If you are a resident of Livingston or attend the University of West Alabama, you see “Livingston” every day on your paperwork, road signs and buildings. However, have you ever thought about Livingston’s namesake?

Livingston, Alabama, known for its Bored Well and the University of West Alabama, owes its name from an American jurist and statesman, Edward Livingston. The seat of Sumter County with a 2010 census population of 3,485 was originally a portion of Choctaw Indian territory until 1830, when the Treaty of Dancing Rabbit Creek—signed between the U.S. government and the Choctaw—removed territory from the native Americans. Incidentally, the city of Livingston’s namesake has nothing to do with the town itself, nor its formation.

Edward Livingston hailed from Clermont, New York and lived an accomplished life. For five years (March 4, 1795 – March 3, 1801), he was a New York representative before becoming the 46th mayor of New York City in 1801–1803 while also being a U.S. Attorney for the same state.

When New York City was overwhelmed by yellow fever, Livingston’s namesake worked tirelessly to relieve the burden of the disease, earning many citizen’s respect and favor. Unfortunately, his personal affairs had fallen into a state of disarray, and he was indebted to the government due to a confidential clerk out of mismanagement or dishonesty. Resultantly, Edward Livingston shortly resigned from office in 1803, surrendered his property, and took to New Orleans, Lousiana.

At the time, New Orleans was simply the Territory of Louisiana, to which our Livingston’s namesake had some connection: the negotiation of the Louisiana Purchase had been done by his brother, Robert R. Livingston. Edward Livingston later paid off his debts in 1826 after building an accomplished law firm.

Livingston’s namesake is perhaps best known for his assistance in drafting the Louisiana Civil Code of 1825, which accumulated sources from French, Spanish, Roman, and common law. While this law set is considered more diverse than most of the 50 states, Louisiana’s civil code is similar to that of the U.S. federal government in administrative law, procedural law, and the U.S. Federal Rules of Civil Procedure. Thereafter, Livingston prepared a new criminal law and procedural code that become known as the “Livingston Code,” and was written in French and English.

The “Livingston Code” was well-praised by several countries, many of which undertook the code. Much of its praise went to the code’s philanthropy in terms of prison reform and discipline, where it called to abolish capital punishment and encourage remediation for prisoners rather than strict punishment.

Edward Livingston would become the Louisiana’s U.S. representative and the first to serve in Louisiana’s 1st congressional district. He alone wrote many of the chapters and all of the contracts in Louisiana’s 1825 legislation. Later in life, he was elected U.S. Senator from 1829–1831 and then the President Jackson’s U.S. Secretary of State (1831–1833).

Livingston’s namesake eventually became the U.S. Minister of France from 1833–1835, and would later return to the state of New York, where he died at the age of 71 in Rhineback.

Feel more informed about this West Alabama college town? For more insight into the culture of Livingston and the surrounding area, continue to follow the UWA Online Continuing Education e-Learning blog! To browse our course offerings, and register for classes, visit www.uwa.edu/ce!